I’d just left Harlem Tavern from a dope dinner with a fellow writer. Apparently NFL game night brings out the fine men. Harlem is definitely winning me over. It was late and I had accepted the fact that you all would not be getting a blog post today. I had to still had to do my hair (a three hour process), send two emails and find something to wear to a private dinner with the cast of Love & Hip Hop on Friday night. On top of that I had a mandatory training for work the next day.

I sat on the train with my headphones in reading an article on The Root on my Blackberry. A bald man in his mid-forties interrupted my groove to ask for a pen. His clothes and bots screamed construction worker. He carried a huge block cell phone in his pocket, you know the kind that was around in the late 80s that only privileged people could afford. A yellow M&M bag sat by his feet. I handed him one of the five pens I keep in my bag at all times after he’d asked if I had one. I looked over to spot him pulling the pink book “written” by the Kardashians out of the M&M bag. 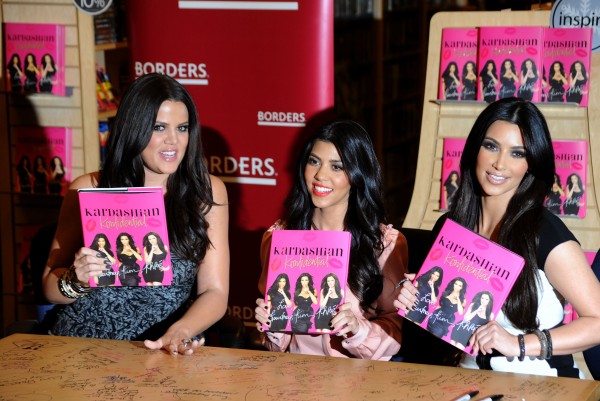 I am not endorsing this book. Hate to even give it publicity.

I had my headphones in so I didn’t really know what he was saying, but I saw him talking to the random guy sitting next to him. He handed my pen and the book to the guy sitting next to him. At that point I paused my music because I was curious to see what they were doing. Blame it on me being a journalist or just plain nosy. The man who’d asked for the pen said to his new partner in crime, “Roxy. Roxy. R-O-X-Y.” Man B looked like he didn’t want any part of whatever this man was asking him to do, but he obliged.

Man B opened the book to the first page and begin air drawing letters. I knew he wasn’t about to do what I thought he was going to do. Before I could blink man B signed Roxy’s name and a signature as if one of the Kardashians had autographed the book. Man A confirmed that he had just pulled a scum bucket move if I ever seen one. “It looks like Kim signed it herself.” He handed my pen back to me without so much as a thank you. I rolled my eyes putting and unpaused my music.

Shortly after man B moved to another seat, far away from the guy. It takes a special kind of dude to buy his girlfriend or wife a book as a gift to then have a complete stranger sign it as if the author signed it personally. She’s going to tell everybody she got an autographed copy of the Kardashian book. She’ll brag to her co-workers that her man got her this book & had it signed. She’ll most likely cherish this book if not for the sole reason that the “author” signed it. Talk about scandalous. I mean sure it’s appealing to want to add the special touch of an autographed copy of a book. But the deceit is so unnecessary. I’ve never understood liars, but it really irritates me when people lie about dumb shit. A man who pulls trickery like that will lie about anything. This is a huge character flaw.

Roxy, if you’re out there and your man rode the LIRR last night, the Kardashians didn’t sign that book boo. Your man is a liar. And he’s most likely sneaky and conniving. Reconsider, girl. Reconsider.