For My Friend, Feeney

The mayor tweeted about you. He posted that Making Your Mark on the World pilot video. I only made it to 1:27 before the tears fell.

Since I heard the news via text I’ve had a hard time coping with the words RIP next to your name. Because being dead at 32 doesn’t make much sense. You were very much alive when we talked a little over a week ago. And now that you’re not, I don’t understand the whys and hows.

Ten days ago I texted you to see how the preparations for the move to Atlanta were going. You said you had a lot to do so you’d postponed the move. You were going to have an intimate going away party at Angel Harlem. I was so proud of you although I was secretly sad you were leaving. Remember I kept calling this our glo’ up season? We were about to glo’ up on everybody. You at CNN.com as the entertainment editor, me writing for new mainstream publications. It was our time. 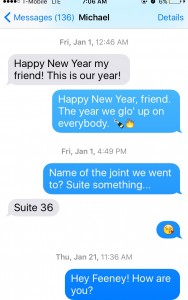 I remember the day we met. It was June 06, 2011 at a NYABJ meeting. We had a good laugh with Jessica because me being me, I raised my hand to ask a very blunt but relevant question. We still laugh about that to this day. The next day I emailed all of you so you’d have my contact info. You were the only person on the thread who responded.

Good meeting you as well. Let’s make some things happen for NYABJ — it’s apparent they really need us.

That’s the kind of man you were.

Who knew a year later you’d be running things as president of NYABJ. You were literally the only reason I came to those damn meetings. I’m not a big fan of forced networking. You’d tell me that was all the more reason to come. At your last meeting as president I beamed with pride seeing you at that podium. You were a beacon of light for the org. Instead of complaining about the things you wanted to see done with NYABJ, you sprung into action. When you emailed me at the end of 2011 to tell me you were running, I knew you’d win. How could you not? So seeing you honored for your four years of service, and everyone toasting you for everything you’d accomplished, was a proud moment as your friend. Even though the meeting was to celebrate you, the first thing you said when you saw me was, “Awww man. I meant to shout you out.” I had just written the Shonda Rhimes covers, and you, in your moment, were thinking about how you wanted the room to celebrate me.

That was the kind of man you were.

The last time we hung out was the night of the NYABJ Christmas party at Clyde Frazier’s. You had a cold. I could tell you were tired and slightly sick. You weren’t your usual upbeat self. I waited with you until the party was over as you rolled up some banner. Even on your way out the door you were still working. You drove me to the train in your white car with NY press plates. I didn’t even know press plates existed until hanging with you. In the car, I had just received the edits to a major piece and was near tears. I hated the edits. You were talking and I was halfway listening because I was knee deep in writing an email over the edits. I read you the email and you laughed in my face. You flat out told me not to send that email. It was too emotional and could be interpreted wrong. I scrapped it and sent something with less words, less feelings. We sat in the car for a few minutes to talk before I got on the train. When I got home I texted you, “Thanks for reeling me back in. That email I was about to send was about to be too LIT.” Your response: “Lol. You have an opportunity that few ever get. You are a good writer and they know it. I’m proud of you and proud to call you my friend. Keep up the good work! Sometimes you just gotta keep your emotions in check. You’re too good to be showing out! Lol.”

That was the kind of man you were.

Always looking out, always wanting to see everyone shine, always being a friend that told me the truth — not just what I wanted to hear.

I’m so angry that was the last time I hugged you. That I’ll never ride in that white car again. That I’m fighting to remember what your laugh sounds like.

Over the last year that our friendship grew, I don’t think I got to tell you that you were the only person who I consistently talked to about the thing we always talked about. We encouraged each other. You passed on contacts. I texted to see how you were doing. We threw shade at silly things celebs were doing. When I wrote that Chi-Raq review on my blog you texted me how I needed to pitch it and be paid for that piece. You were always thinking about the work and how us writers should be compensated for it.

That’s the kind of man you were.

Remember when we started getting close. You told me I needed a male brain trust for the men I was dating. I texted you about this guy I was talking to who went to Delaware State with you. You told me he was good people. But you thought everybody was good people. You had love for everybody. I told you the guy and I had no chemistry. You told me to give it time. It didn’t work out, but I appreciated that you were hopeful. That’s when our friendship blossomed.

I’ve sobbed on and off all evening. I aimlessly checked Twitter and Facebook to read people’s amazingly kind words about you. Through the grief I keep going back to our texts. Even through tears I smile and laugh at some of the things we used to write in those texts. It’s so unreal that you’ll never text me again.

To think that you went into cardiac arrest when you had the heart of gold is not lost on me. Before today I always thought the saying “the good die young” was stupid. I mean, the good die at all ages. I think I understand now. You were just 32. You are still supposed to be here.

Your accomplishments in journalism go without saying. And many people will honor you with their words over the upcoming weeks. I know what I’ve written here doesn’t do you justice. I really don’t have the words but I had to write. You, more than anyone, would understand that.

I’m incredibly grateful to call you a friend. You saw the best in me.

Tell God I’d prefer it if you were here with us, but I at least know you’re up there with a pen in your hand, taking notes. You wouldn’t have it any other way.

Rest in love, my friend. The good really do die young.